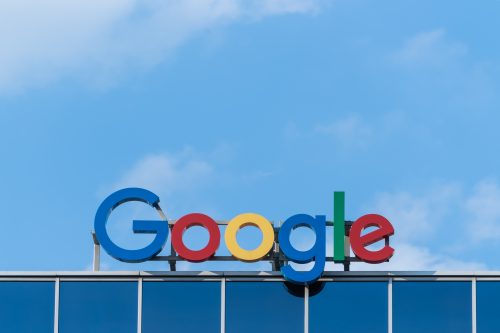 On 3rd June 2019, the world of SEO was blessed/cursed with a Google Core Algorithm Update.

As you may or may not know, these tend to be a bit of a big deal in the world of Google Search and the impact can be varied. One site may see a huge boost to rankings, sessions and even revenue in the wake of the update. Or if you’re unfortunate your site may lose all of that and more.

But, that’s not all Google has been up to in June and the implications of these updates can mean big things for the future of Search…

It hasn’t been long since the last Core Update in March, so this has certainly come as a bit of a surprise. Thankfully, Google had the forethought to announce this one ahead of time: 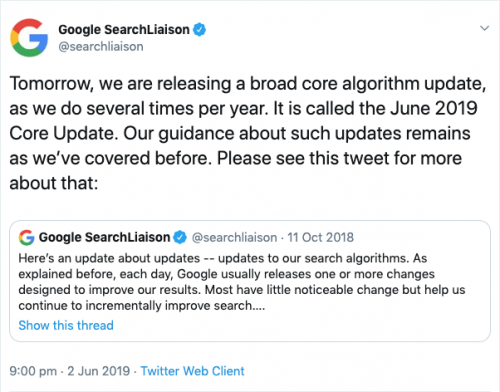 But, the exact impact of this update is still yet to be seen. So far, the effect cannot be fully determined on most sites. Rankings have fluctuated, traffic has changed slightly, but otherwise, it may take another week to see the full impact of this particular update overall.

However, for one site we can see there has been a massive impact…

Above, you can see the SearchMetrics data for the Daily Mail. No matter your thoughts on the publication, there’s no doubt it is a big source of news. This most recent update has seen the site traffic plummet; from a SearchMetrics score 715, 276 all the way to 395, 556. Now, obviously, this data is only a representative value of site performance, but the SEO Director of the MailOnline has come out and admitted they have lost 50% of traffic following the update. 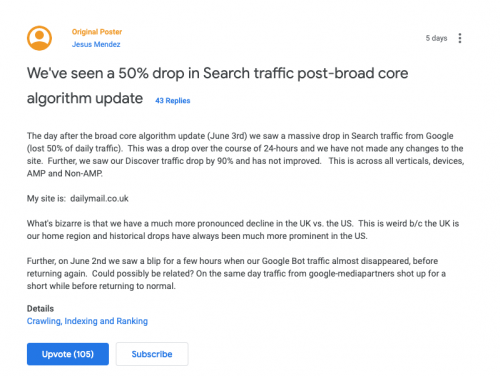 At the moment, we haven’t noticed anything quite this dramatic. But, it just goes to show that even major publications aren’t immune to the power of a Google Update.

Importantly, Google didn’t stop at the Core Algorithm Update. In a separate – but, still extremely important – update Google has set themselves the task of diversifying search results. This began rolling out from June 4th and was completed on June 6th; we have already seen the impact of this update in practice here at Red Cow.

What this means moving forward is that you’re unlikely to see two of your URLs ranking for the same search term. So, for all of the keyword cannibalisation naysayers, this will no doubt be a harsh wake-up call. As, of course, there is no guarantee that the page Google ranks moving forward will be the one they value the most.

For example, the reality could be that now your informative blog post is ranking but not the product page which generated X amount of revenue previously. Past optimisation and ranking multiple pages for the same keyword, then, may now come back to haunt your site.

Of course, Google has said that in cases where relevant more than one listing may still be shown. So it is still possible to rank multiple URLs for the same keyword, but likely it will be harder moving forward.

Also, it’s important to note that this will affect subdomains:

The reason for this update affecting subdomains could be anything. But, there is the question of whether or not this is a subtle push from Google for more sites to adopt subdirectories rather than subdomains when adapting a site for international SEO.

Here at Red Cow, we have seen the effect of the Diversity Update in action already.

One of our clients previously had three listings which ranked for the same keyword. This was not by design, in fact, one of the page’s ranking was simply an in-depth analysis of a broader keyword and not the one targeted. Following the update, at the beginning of this week, we have noticed only two pages rank for the target keyword. The first is the page which has been optimised and the second is the informative article.

So, in this instance, Google has obviously chosen to keep the relevant optimised page. But, then it also included the article as that too boasts a high level of relevancy. The third surplus page has been removed from search results completely.

Google Updates aren’t something you can ever really plan for, outside of having a well-optimised and high-performing site in the first instance. When a Google update negatively affects a site, often the issue lies with the site itself. Google doesn’t target one particular site or niche, no matter how much it may feel like it when your site is affected.

Here at Red Cow, we aim to ensure every one of our client sites is as prepared as possible for an update. For more information on our services, please don’t hesitate to contact us.